There is a very large risk that the temporary shock to schooling from COVID will turn into large, long-term, lifetime losses for today’s children if schools re-open in “business as usual” mode. But if countries act now and plan to adapt their teaching to students' actual levels of learning, this long-term loss to today’s youth can be avoided. The efforts of “flattening the curve” of COVID-19 may lead, inadvertently, to “flattening the learning curve” of children, from which they may never recover.

What can research tell us about the risks to children?

The risk is illustrated by a recently completed study (study, essay, and blog) of the impact of the severe earthquake in Pakistan in 2005. The researchers found that four years after the quake the standards of living of households in the affected area had fully recovered and hence the economic impact was severe but short-lived. However, even though schools were only closed on average for 80 days, they found children in the earthquake affected areas were one and half to two years behind other children in their learning. So, rather than learning losses being a short term, transitory effect of a crisis, the learning losses multiplied and were much bigger than would have been expected from just having lost the 80 or so days of school.

We have a pretty good idea of the mechanism of both how and why short run losses persist and can lead to even larger learning losses in the long term. A increasingly large body of research using a variety of methods (descriptive evidence about learning profiles, experimental estimates of program impacts, qualitative research) shows that in many developing countries there is a massive mismatch between the curriculum and the typical student’s actual learning level. The coverage (both within and across subjects) and complexity of the material the curriculum expects to be taught far exceeds what the typical child can actually learn given their starting point and the actual time and quality of instruction they experience. The lack of what is broadly described as “teaching at the right level” means many children fall further and further behind and hence learn less and less from school.

Some possible scenarios of lost learning

Figure 1 is an illustration, using a formal model (simple set of equations) to simulate the danger from the combination of curricular mismatch and school interruptions (and it is just illustrative, not probative). In the simulation a child is normally in school for 10 months and then on a break of two months. During the ten months in school the curriculum assumes a measure of the child’s skill in a domain (which could be curricular competency objective: critical thinking, reading, mathematics, art, science, etc.) goes up by five points a month (obviously the specific number is an arbitrary normalization, but the illustration works in any scaling). And, one assumes that during the break there is some forgetting and skills go down each month by half as much as they go up.

However, suppose that children who are behind the skill/competency level at which the curriculum and pedagogy (e.g. textbooks, exercises, classroom exposition, demonstrations, etc.) are pitched learn less per month than those at the “expected” curricular level. The simulation supposes, as illustrated in the embedded graph, that if a student is 20 points behind they learn only four units a month, not the planned five. If this is so then a child who is behind learns less, gets further behind, learns less, and hence their learning curve flattens over time and their cumulated learning is much less than the curricular expectation.

In the graph the orange (dotted) line illustrates the progress of the curriculum over give years of schooling (10 months in, break of two months). The blue (dashed) line illustrates the progress of a student who starts the first grade of the simulation at skill level 40 whereas the curriculum expects 50 (hence 10 points behind). In this simulation the child starts 10 points behind and five years of schooling later is 66 points behind and so has lost about a year’s worth of learning (50=10 months*5 points a month) from curricular mismatch.

Now, what happens if in the first year of this simulation (and the first year could be Grade 2, Grade 5, etc.) the child’s schooling is interrupted for three months? The naïve guess of the loss is the curricular pace per month (five points) times number of months (three) and hence a loss of 15 points, which over the long-term at the curricular pace the gain would be 250 points so this is a regrettable loss but inevitable from the COVID interruption.

Figure 1: Illustration of how even short schooling interruptions can flatten the learning curve, leading to long-term losses 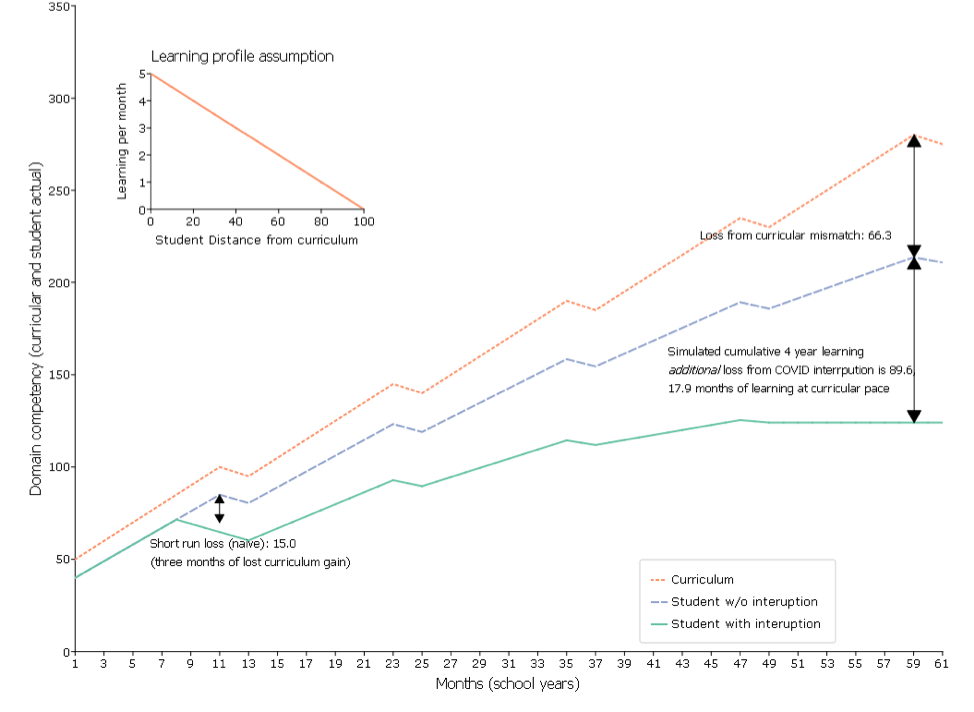 But, if (i) a student learns less when they are behind and (ii) they lose skills when not enrolled and (iii) the curriculum when school re-starts (e.g. when Grade 4 starts after the break they start with the Grade 4 textbook, teaching, etc), these combine to produce a long-term disaster. The green (solid) line represents the same students learning after a three month COVID-19 interruption followed by a normal two month break. The student is then substantially further behind than they would have been and hence further from the curriculum. Hence their learning curve is flatter than it would have been (they learn less each month of instruction), which means they get further and further behind over time. In this simple simulation, the student loses an additional 90 points, or 18 months of curricular pace learning (90=5*18) from a three month interruption. The long-term loss is six times bigger than the short run loss.

What can be done to mitigate the loss?

This loss is not inevitable. All that has to happen to mitigate this loss is for school systems and schools to recognize that when they re-start they have to re-start when the students now are, not at where the pre-interruption curriculum expected them to be. This figure uses the same simulation model to show different trajectories of learning for the same hypothetical student) if the curriculum adjusts. The magnitude of the long-term learning loss depends on how much the restarting curriculum adjusts.

Figure 2: Adjusting the curriculum can ‘unflatten’ the curve from short-run interruption . . . and more 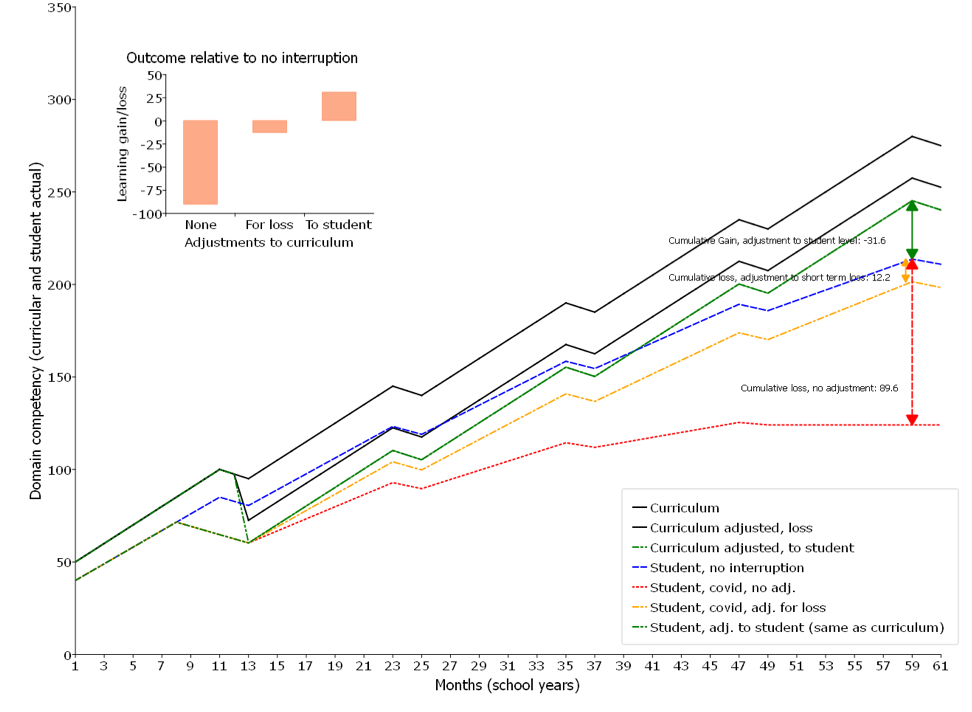 In the simulations in the second figure (again, which I emphasize is illustrative of the mechanisms, not probative that this is the actual case in any given country context), I show that if the curriculum re-starts after the three month interruption plus two month break at a level that accounts for the loss assuming the curriculum had been taught (which is 22.5 points lower than it would have been from a three month interruption, 5 points per month learning loss, 2.5 months additional forgetting) the loss, instead of being 89 points is only 12.5 points over the whole five years, slightly less than the naïve estimate.

And it should be obvious that if school systems use the opportunity of the break and the consciousness of the losses from the curricular mismatch to adjust the curriculum to the actual student’s level, then the student does absolutely better, even with the COVID interruption, than the business as usual trajectory.

This blog and these graphs are meant to be the simplest and illustrative explanation of the mechanism whereby short-run losses turn into even larger long-run losses. Qualitatively similar conclusions emerge from more sophisticated modeling of the learning loss from an interruption using a structural model of learning that is parameterized and calibrated.

Countries will make difficult, but necessary decisions about school closures to protect the health of their citizens. The length of school closures and the indications and recommendations for a safe re-opening are a complicated set of issues that many are discussing (e.g. here and here from my friends at the Center for Global Development). But there is a huge additional issue of what is going to be taught and how when schools re-open. A “business as usual” re-opening, for instance, where schools closed early in the school year, then had the normal seasonal break, then re-opened with students having progressed a grade and teaching at that grade just using the same curriculum and materials and approaches could lead to an entirely avoidable long-run disaster. That approach risks flattening the child’s learning curve, can lead to escalating learning losses for the affected children, and will reduce their learning and opportunities for their entire lifetime.

The idea that a few months lost to school children was a regrettable sacrifice but small and temporary loss may well be completely, totally, tragically wrong. There is little time to address this question of how to accommodate teaching in re-opened schools to the learning losses, but it is essential. Governments should make addressing these questions one of their highest priorities.