The RISE Education Systems Diagnostic is a set of tools to support local actors in selecting high-level strategic priorities to improve student learning based on the latest education systems research.

The Diagnostic can be implemented at the national, regional, or local levels. As of 2022, the Diagnostic has been implemented in seven field-based studies across Africa, Asia, and Latin America, led by diverse teams spanning NGOs, think tanks, consultancies, academic researchers, and government counterparts. These teams have used the Diagnostic for a range of objectives, including:

Systems thinking in the Diagnostic

The Diagnostic in practice

Systems thinking in the Diagnostic

This Diagnostic was developed by the RISE Programme, a long-term, multi-country research endeavour studying how education systems can overcome the learning crisis and cultivate learning for all children. A key premise of RISE and of the Diagnostic is that the challenges facing education systems are complex. Systemic educational challenges involve interactions and feedback loops among different actors, structures, processes, and resources. These interactions mean that introducing a standalone policy reform can have unpredictable consequences for schools, classrooms, and students. Instead, we need to look at education systems holistically and to identify reform priorities strategically. This attention to complexity, interactions, and different parts of a system is called systems thinking.

Accordingly, the Diagnostic is anchored in the RISE Education Systems Framework (Pritchett, 2015; Silberstein and Spivack, 2023). This framework is encapsulated in a 5x4 matrix that lays out the key relationships of an education system, the elements that characterise them, and the interactions between them.

Figure 1. The Diagnostic is based on the RISE Systems Framework, which maps the relationships between different actors in an education system and explores the effects of these relationships on systemic outcomes. 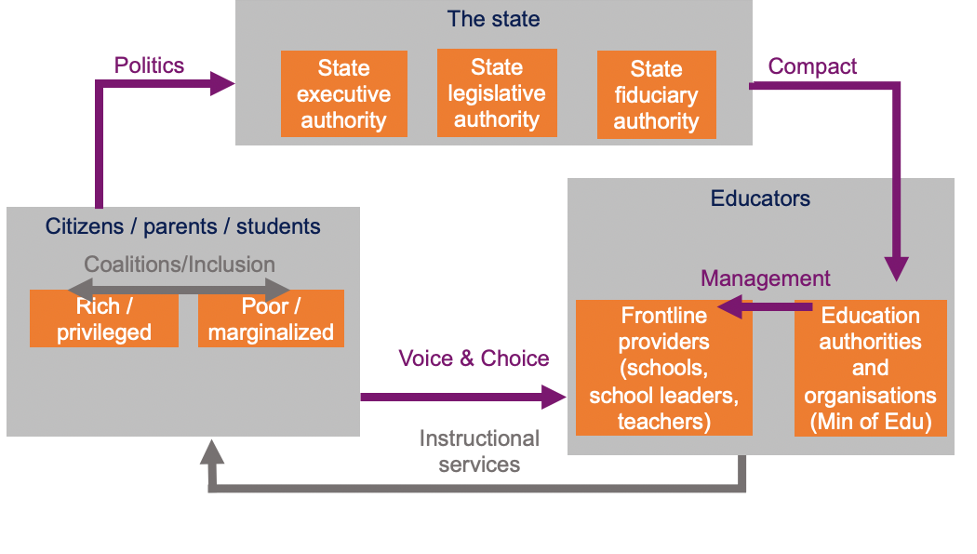 The Diagnostic in practice

To achieve this, the Diagnostic analysis involves three components:

Typically, the Diagnostic is led by a local team. This team could be based at a range of organisations, such as a think tank, government advisory organisation, civil society organisation, consultancy, or a university. It often involves a collaboration with government. However, other configurations are possible, such as a research organisation conducting the diagnostic on its own, or an organisation conducting the diagnostic with stakeholders other than government. Additionally, a steering committee comprising stakeholders from government and other parts of the education system should be formed to advise the research team. This steering committee will be involved in formulating recommendations based on the Diagnostic fieldwork and analysis.

The Diagnostic aims to generate a shared understanding among actors about the challenges the education system faces, and to facilitate the identification of priorities for intervention. Accordingly, the process is highly participatory. Workshops with government and other stakeholders form the core of the diagnostic data collection process, and the final recommendations of the process are generated by the steering committee, based on the analysis conducted by the research team.

Besides this shared understanding, the tangible final output of the diagnostic is a final report: a narrative-driven document describing the major misalignments within the education system that hinder children’s learning, and outlining top priorities for reform. From inception to final report, teams should plan on a timeline of approximately six months for implementing the Diagnostic.

The RISE Diagnostic Toolkit comprises eight sections, all of which facilitate the implementation of the Education Systems Diagnostic. These eight sections are divided into three parts, as set out below.

Individual sections of the toolkit can be downloaded below. A single PDF compiling all toolkit sections is also available.

This introductory section aims to acquaint readers with the Diagnostic and to offer a preview of the rest of the toolkit.

This section lets users explore the range of its possible applications. It gives a brief description of the Diagnostic pilot studies conducted thus far. Each pilot study is discussed in terms of its context, purpose, implementation partners, implementation approach and adaptations, and key findings.

This section lays out the conceptual background necessary to understand the RISE Education Systems Diagnostic. It can be read either as a section within the full toolkit or as a standalone RISE Insight.

The Planning and Analysis Tools, which take the form of an editable, macro-enabled Microsoft Excel workbook, enable users to analyse the key alignments and misalignments within their education systems.

Users can refer to the glossary for quick explanations of all of the terminology used in the RISE Education Systems Diagnostic Toolkit.

This section compiles a selection of materials—including data collection tools and final reports, among others—from the Diagnostic pilot studies conducted in 2022. The hope is that this section will inspire users as they design and implement their own Diagnostic studies.

Or read our blog series on the RISE diagnostic pilots:

What We Learned from Our RISE Baseline Diagnostic Exercise