Seldom do researchers have the opportunity to embark on a study of education in a developing country because it is doing so well. Vietnam is that successful, exceptional story.  Once one of the poorest countries in Asia with abysmal living standards and poor educational attainment in the wake of colonialism and wars, Vietnam transformed itself in the span of 25 years, and it now boasts one of the world’s highest growth rates and remarkable educational outcomes.

Vietnam’s achievements in primary and secondary education have surpassed those of many advanced countries, including both the US and the UK. In 2012, for example, Vietnam ranked 17th in math and 19th in reading out of 65 countries on the Programme for International Student Assessment (PISA), the worldwide scholastic measure of 15-year-olds that is undertaken by the Organisation for Economic Co-operation and Development (OECD). Vietnam’s primary school completion rate is 97 percent, and its lower secondary enrolment rate is 92 percent.

The graphs below illustrate the exceptional performance Vietnamese students have demonstrated on the PISA reading and maths assessments. The vertical scale shows how students in various countries scored; the higher the vertical position of a country, the higher its students’ scores. The horizontal scale shows the per-capital Gross Domestic Product (GDP) of the countries; the farther right the country’s position, the higher its per-capita GDP. Vietnam’s position shows that its students far outperformed countries with similar GDP levels, reaching levels as high as or higher than students in many far wealthier countries.

At a time when the world is facing a learning crisis, the lessons the RISE Country Research Team (CRT) will learn from the Vietnam case are crucial. The team will seek to understand what worked in the Vietnam context, and what lessons can be applied elsewhere. Furthermore, the researchers will also seek understand what did not work in Vietnam’s drive to achieve remarkable gains in education; for example, Vietnam’s results are not uniform for all the country’s socioeconomic and ethnic groups, or for all its many regions. At present, concerns remain about the need to decentralize the school system, as well to the need to bring increased transparency to Vietnam’s complex mix of public and private financing of education. In short, Vietnam offers the RISE Programme an opportunity to understand how to create and sustain success - and how these lessons may apply to other countries seeking to do the same.

The RISE Vietnam Country Research Team will examine the institutional reforms to learn what levers of support made such an extraordinary change possible. The researchers will look Vietnam’s past, present and upcoming educational system reforms to understand how and why Vietnam is able to leverage its policies to achieve such exceptional learning results – with the aim of gaining insights that can prove useful in policymaking in Vietnam and in other nations.

The research will seek to establish which elements and relationships within Vietnam’s education system lead the “actors” in the system – parents, teachers, and administrators -  to act in ways that produce student learning. Researchers will also seek to understand where and why gaps persist. The research will create a map that seeks to understand how the system works in theory and in practice on key matters such as delegation, finance, information and motivation. Key features of Vietnam’s governance and economy that will inform the analysis of the education system include: 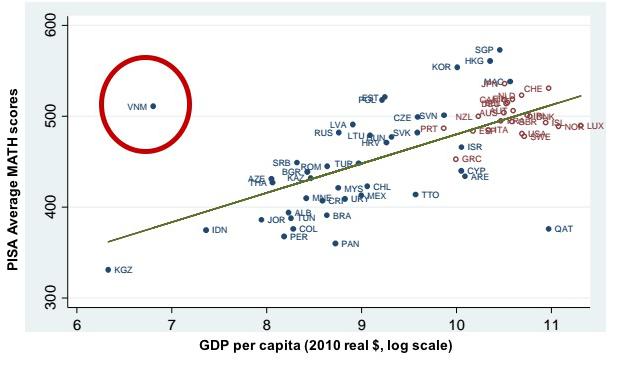 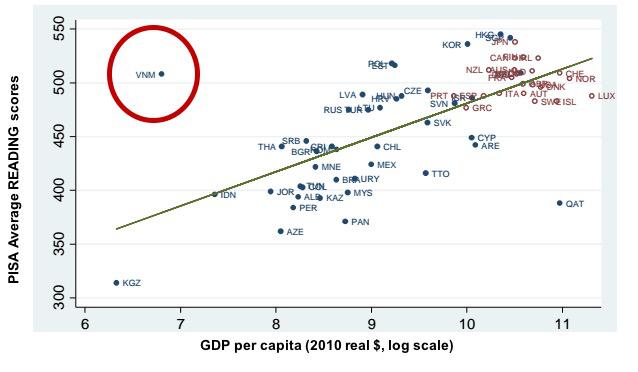 Question 2: What impact will new reforms have?

Vietnam is implementing several major initiatives to make further progress in enrolment and learning outcomes. A 2012 decision outlining the national education strategy through 2020 ensures that at least 20 percent of the state budget must be spent on education. Important reforms from this same decree are: