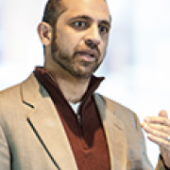 Asim I. Khwaja is a Principal Investigator on the RISE Pakistan team. He is a Professor of International Finance and Development at the Harvard Kennedy School. He received the Tamgha-i-Imtiaz, Pakistan’s fourth-highest civilian award, for his work in education and was awarded a Carnegie Fellowship in 2009. In addition to his work on education he serves as the principal investigator on numerous other research projects working to inform policy in Pakistan, including a large property tax experiment, and a comprehensive vocational skills project. His research on finance and institutions has been published in journals such as the American Economic Review and the Quarterly Journal of Economics, and his work has been covered by numerous media outlets, including the Economist, the New York Times, the Washington Post, Al-Jazeera, BBC and CNN. He was an author of the Learning and Educational Achievement in Punjab Schools (LEAPS) report, an extensive study of the schooling environment more than 100 villages in rural Pakistan.

Upping the Ante: The Equilibrium Effects of Unconditional Grants to Private Schools

The Power of Information in Improving School Performance