Chart of the Week: Teacher Pay around the World: Beyond “Disruption” and “De-skilling” 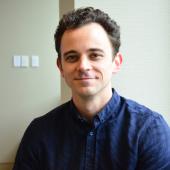 Education is in crisis, in the sense that hundreds of millions of kids are currently in school who will probably never acquire functional literacy or numeracy. More and more, the rhetoric from aid agencies is focused on the need to improve the quality of teaching, and indeed reform whole systems. This emerging consensus is generally skeptical of increased spending.

Indeed, once you strip away the hype, proposals to “disrupt” failing education systems in developing countries often boil down to paying teachers less. That agenda is rarely explicit, but it’s nearly ubiquitous. From low-cost private schools to ed tech and scripted lesson plans, the common denominator of many of the most celebrated innovations in global education today is cutting reliance on well-paid, public employees.

What does the empirical evidence on teacher pay and student performance around the world tell us about the prospects for this agenda? If you believe more money and more teachers is the answer, read the first two points below. And if you think teachers unions and bloated salaries are the problem, stay for the third point as well.

This may come as a bit of a surprise to many rich-country readers. There's no doubt that teachers in, say, India earn much less than teachers in Ireland, but relative to context, they tend to be very well paid. Dividing by per capita GDP is a rough and ready way to put salaries in context. With the help of my research assistant Mallika Snyder, we pulled together teacher salaries from as many countries as possible and ranked them in terms of their ratio to per capita GDP. 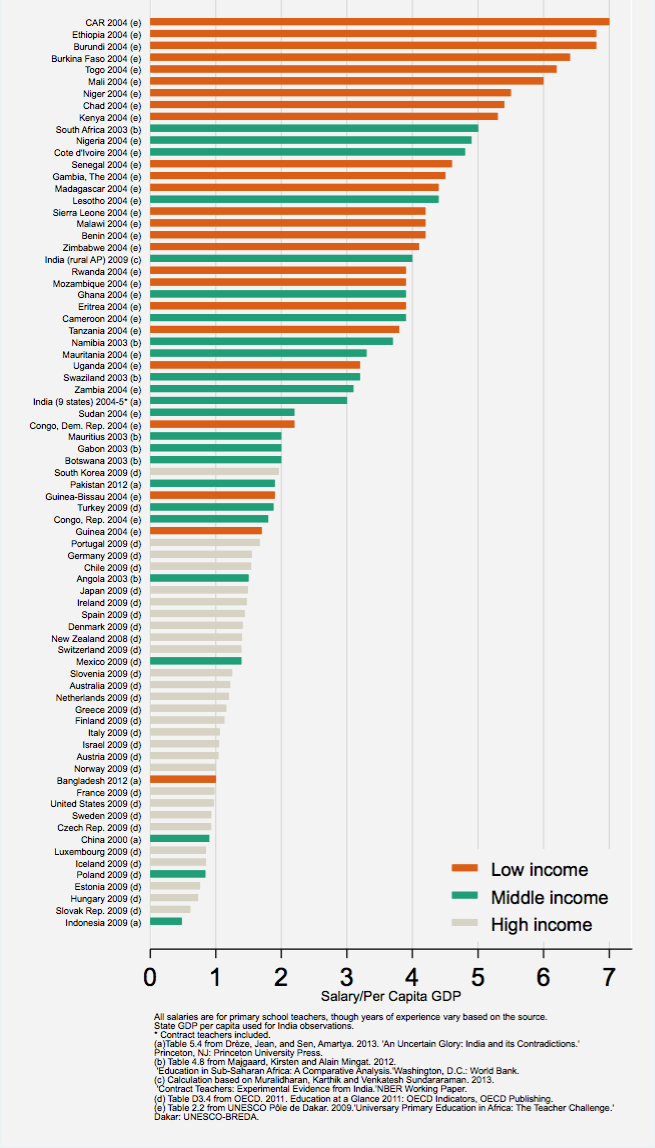 In most OECD countries, an average teacher earns somewhere between 75 percent and 150 percent of GDP per capita. Most sub-Saharan African economies are at the other extreme. Looking at the two largest countries in the region, Nigeria pays teachers nearly 500 percent of per capita GDP, and Ethiopia nearly 700 percent.

2. High pay isn't a reward for skill or good teaching

There is a second explanation though, that seems to fit the evidence better. Public school teachers in many developing countries earn civil service salaries that are far higher than market wages. This is what economists traditionally refer to as “rents.” The graph below highlights four examples.

In Kenya, identical teachers earn twice as much in public schools as the private sector. That's the conclusion from my recent paper with Nicholas Barton and Tessa Bold, "Measuring Rents from Public Employment" which exploits a discontinuity in the hiring rule for civil service teachers in Kenya to compare their earnings uncontaminated by observable or unobservable human capital differences. Because hiring is done almost entirely on seniority, teacher training graduates wait in a long queue for government teaching jobs in Kenya—in some districts as long as eleven years in our sample—and often work in the private sector until their number comes up. Comparing people just above and below the hiring cut-off in a given year gives us a clean measure of the salary jump from public employment— which we find is roughly 100 percent. 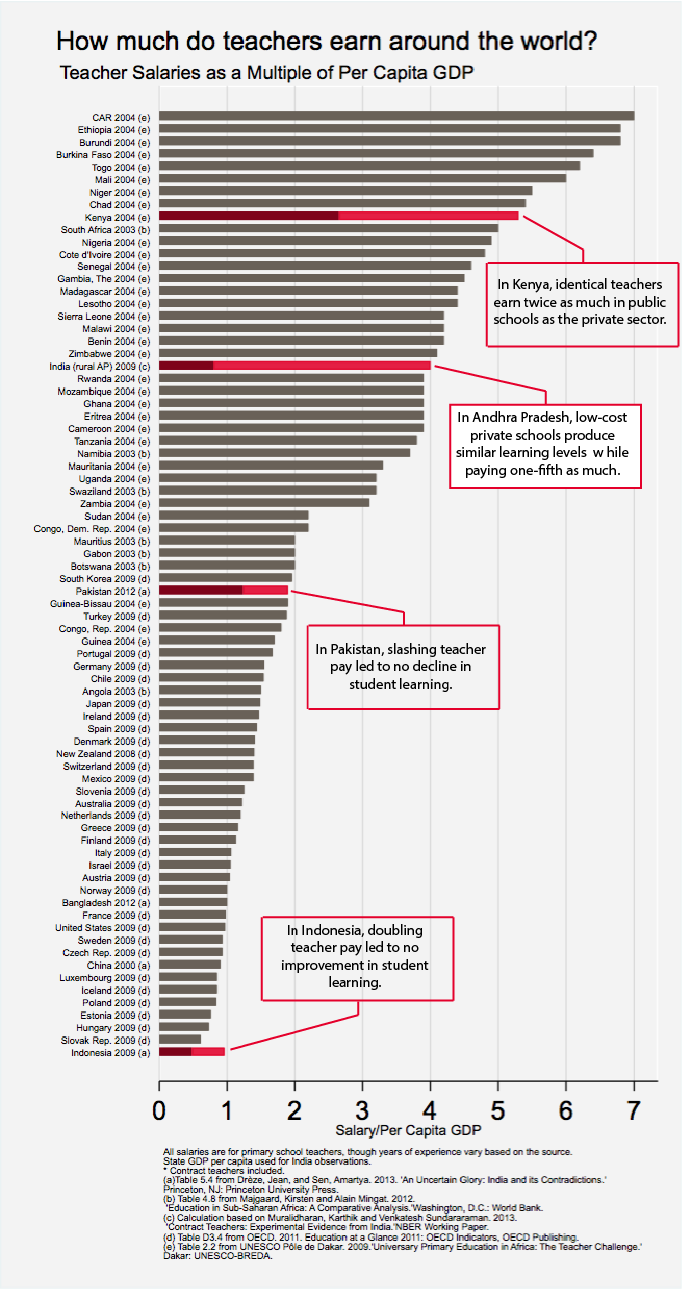 Our paper joins a number of recent studies with very underwhelming findings about the impact of teacher pay. In India, Karthik Muralidharan and Venkatesh Sundararaman  found that low-cost private schools produce similar learning levels while paying one-fifth as much. In Pakistan, Nathalie Bau and Jishnu Das find that shifting teachers to short term contract status—effectively slashing their pay by 35 percent—led to no decline in student learning. And perhaps most strikingly, an RCT in Indonesia by a team at the World Bank found that doubling teacher pay led to no improvement in student learning. The paper’s title says it all: “Double for Nothing.”

(I confess that my emotional reaction to the Indonesia study changed a bit when I saw where Indonesia ranked on teacher pay beforehand—i.e., dead last in our data.)

3. But teacher quality matters a lot for student outcomes

In the United States, a much-touted study by Raj Chetty and colleagues followed the participants from a randomized trial in Tennessee in the 1980s who had been assigned to different teachers, and found that based on the benefits they deliver to their students it would make economic sense to pay an above-average kindergarten teacher about $320,000 a year.

There's some evidence this same logic applies in developing countries. A massive study by the Inter-American Development Bank randomly assigned kids in Ecuador to kindergarten teachers and found major divergence in their learning outcomes. While they can't (yet!) trace these effects through to adult outcomes, the size of the effects on test scores is at least as large as the US results in the Chetty et al study. A similar study in Uganda by Julie Buhl-Wiggers and coauthors that randomly assigned pupils to classrooms found similarly large effects of teacher quality on student outcomes.

If we take these results seriously, teacher salaries that are five- or even seven-times per capita GDP as in Nigeria or Ethiopia may not look so crazy after all.

There is a risk that the emerging policy consensus among international donors and policymakers about the “learning crisis” in developing countries is built on points (1) and (2), while failing to process point (3). Teachers are seen as overpaid and underperforming, and solutions focus on replacing them with cheaper labor or even capital, in the form of “ed tech.”

In case you think I exaggerate, here’s World Bank President Jim Kim at a recent CGD event (starts around minute 39:00):

So we did a study on the quality of education, the achievement of teachers in six East African countries [Bold et al 2017]. And when we gave tests to the teachers in these six African countries, and this is in our World Development Report, only one-third were able to pass the second grade test. Right. So I would ask you, is there a path forward where putting more money into that public system is going to lead to the system disrupting itself and getting to better outcomes? Right.

If you watch the full clip, you’ll see putting this quote in context makes it more, not less startling. Kim is talking about a wholesale shift away from the World Bank providing aid to governments in favor of facilitating commercial deals, with a goal (again, explicit) of replacing public delivery with private involvement in “health, education, water, other services.”

Creating a professionalized teaching corps, where high pay is matched to high expectations is no small task. Given the daunting nature of that kind of institutional reform, it is not obvious that the World Bank would be wrong to focus on  scripted lesson plans, and to promote investments in education technology, automation of the teaching profession, and less reliance on highly-educated teachers that are in short supply in many poor countries. But don’t forget point three. Because for all the hype around disruption and automation, the current evidence is equally consistent with the idea that investing significantly more money to train, recruit, and retain the highest quality teachers in public education systems is even better value for money.

Thanks to Maryam Akmal, Mallika Snyder, and Divyanshi Wadhwa for research assistance, and to Lant Pritchett for helpful discussions.