Learning Levels Will Not Improve by Spending More on Education 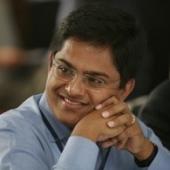 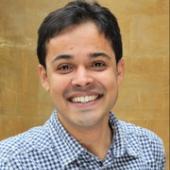 Interventions that improve school governance and time-on-task on instruction, and those that improve pedagogy–with a focus on matching instruction to the learning level of students–have been shown to be highly cost-effective at improving learning outcomes.

A fundamental tension in the design of education systems is that, historically, they have served three very different roles. First, they have sought to impart knowledge and skills that improve employment and earnings prospects (the human capital role). Second, they have aimed to create shared norms of behaviour, values, and identity (the socialisation role). Third, they have aimed to assess and classify students by educational ability and achievement to select students for higher education and skill-intensive occupations (the sorting role).

These facts are illustrated strikingly by the figure below, which shows the levels and dispersion of student achievement in mathematics in a sample of over 5,000 students spanning Grades 1 to 8 across 40 schools in four districts of Rajasthan (using data from an ongoing study). The x-axis shows the grade the student is enrolled in, the y-axis shows the grade that their actual learning level is at, and each dot represents 10 students. The blue line is where students would be if they were at a grade-appropriate standard and the red line is where the true average learning level is at. 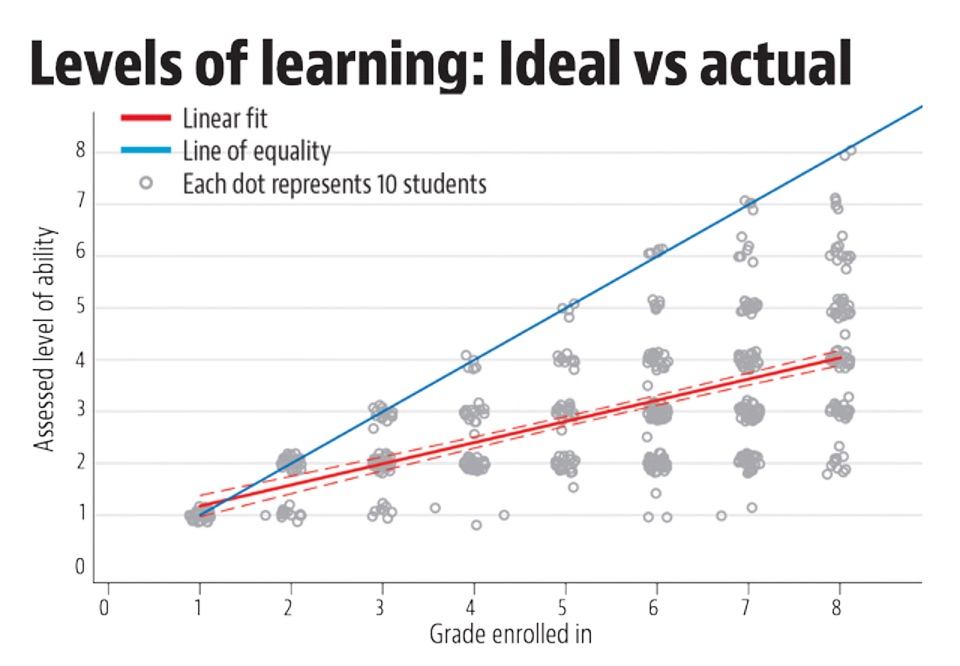 There are three key patterns in the data.

First, the average rate of progress of learning is substantially lower than the rate envisaged by the syllabus and textbooks (around half). Second, as a result, the gap between average learning levels and the standards of the curriculum grows over time. Third, there is a striking amount of dispersion in within-grade learning levels—for instance, students enrolled in Class 8 range from second to eighth class in their learning levels. Similar patterns are seen in our data from Delhi and Madhya Pradesh.

The patterns shown in this figure may well be the most important facts about education in India.

While the facts about low average levels of learning are well known, the figure shows the striking variation in student learning levels within a class. It highlights both how far behind grade-level curricular standards many students are, and also the difficulty that teachers face in handling such variation in student achievement. In Delhi, we also find that students in the lowest third of within-grade test scores in Classes 6 to 9 make no progress in learning during the school year, despite being enrolled in school. This is consistent with their being so far behind curricular standards, that textbook-based classroom instruction is essentially useless.

We believe, therefore, that the single most important goal for education policy in India should be to deliver universal functional literacy and numeracy to reduce learning gaps in early grades itself. Seventy years after Independence, a large fraction of children completing primary education are still not functionally literate and numerate. This is both an economic and moral failure. It inhibits the skill formation needed for economic growth and also robs millions of children and youth of the opportunity to participate in broader economic growth.

Finally, this problem will not be solved by spending more on education in a business as usual way. A key message for education policy from over two decades of high-quality research on education in India is that large increases in education expenditure and enrolment have not translated into improved learning. The facts presented above provide a likely explanation for the low productivity of time and money in our education system. Money is spent on building schools and hiring teachers, and the no-detention policy aims to keep children in school and prevent dropping out, but very little learning is taking place because most children are too far behind the level at which instruction is taking place.

In contrast, interventions that improve school governance and time-on-task on instruction, and those that improve pedagogy—with a focus on matching instruction to the learning level of students (“teaching at the right level”)—have been shown to be highly cost-effective at improving learning outcomes. Regardless of the election results, we hope that the next government will prioritise delivering universal literacy and numeracy over the next five years, and make use of the available evidence to do so in a cost-effective way.

This post originally featured on the Hindustan Times website on Tuesday, 23 April 2019 and has been cross-posted with permission.

The ideas here are expanded upon in the chapter on “School Education Reform in India” in the book What the Economy Needs Now, published by Juggernaut.