The Need for a Pivot to Learning: New Data on Adult Skills From Indonesia

New data from Round 2 of the OECD PIAAC (Organisation for Economic Co-operation and Development Programme for International Assessment of Adult Competencies) show the typical Indonesian adult (25-65 years old) living in Jakarta, who has completed tertiary education, has lower literacy proficiency than the typical Greek or Dane who completed only lower secondary school. Additionally, the Jakartan with tertiary education had lower literacy proficiency than adults in every other OECD country who only completed upper secondary schooling.

Figure 1:  Jakartans with tertiary education have the same literacy proficiency on the OECD PIAAC assessment as Danes who have less than upper secondary schooling. 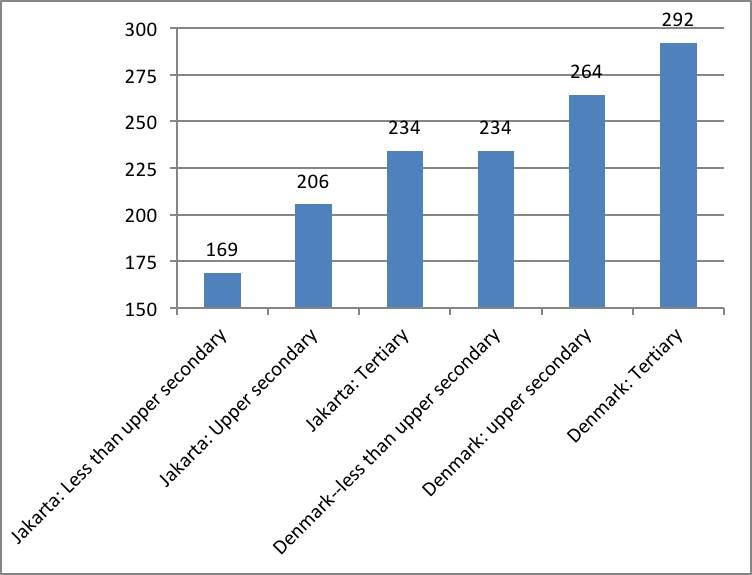 The results from Jakarta are shocking and reinforce all of the empirical premises behind RISE.

This is the kind of finding about education in the developing world that drives the RISE research agenda.  The RISE focus on getting systems of basic education to pivot to learning is based on empirical observations about the current status of schooling.

Learning in many developing countries is very far behind the rich countries.  The assessment of literacy in proficiency was based on a six level scale from “below level 1” to “level 5”. A person at level 1 (who would score between 176 and 226 points) should have the following skills:

In literacy, the typical (median) Jakartan scored 200.5.  In the USA, not known for high performance schooling and with wide social inequalities, the person at the 10th percentile scored 204.2.  In high performing, low inequality countries like Finland, Japan, Slovak Republic, and Korea, the 5th percentile adult did almost as well as the typical Jakartan.

There are social inequalities within country,  but even the highly schooled in Indonesia are far behind global standards.  There is, rightly, a great deal of attention paid to the fact that marginalized and disadvantaged groups (first generation learners, ethnic minorities, women) are lagging behind.  And this is true in Indonesia, but in thinking about the education system, it is important to keep in mind this doesn’t mean the disadvantaged are getting a bad education and the advantaged in Jakarta a good education - it means the disadvantaged are getting a terrible education (essentially none at all) and the advantaged a bad (or mediocre at best) education.

For instance, adults who had at least one parent who completed tertiary schooling scored 63 points higher than another adult who had neither parent complete upper secondary schooling.  Existing social inequalities are definitely perpetuated by the current system.  But the “advantaged” in Jakarta (those with a highly educated parent) scored 258 which is lower than the “disadvantaged” adult (those with neither parent having attained upper secondary education) in 9 of the 28 OECD countries.

Hence, reducing inequality by bringing everyone in Jakarta up to the Jakarta mean would leave all Jakartans massively disadvantaged globally.

The “high performing” adults in Indonesia - the 90th percentile - score at 263 which is lower than the OECD median adult (271) and, strikingly, is lower than the average OECD adult with just an upper secondary education (264).

While societies want the average level of education for all to be high, they also need highly skilled leaders in their politics, social and civic life, and their economy.  The problem with learning performance is not just that 69 percent in Jakarta are at level 1, but also that there is essentially no one at level 5 and only .5 percent at level 4.  Level 4 or 5 literacy proficiency is attained by about 1 in 10 adults in the OECD, but only 1 in 200 in Jakarta.  Even among those with tertiary education, only 2 percent are at level 4 or 5 (compared to 21 percent of those in OECD with tertiary).

The ability of expansion in enrollment/attainment to close the gap is small.  Indonesia, like most countries, has made massive progress in expanding enrollment.  Comparing the older to younger adults shows that 57.2 percent of older adults 55-65 (yikes, my age!) had less than upper secondary schooling, but that has fallen to only 29.6 percent today.  This progress in expanding attainment in schooling, combined with the low levels of learning, imply that little aggregate progress can be made just by expanding access.

A simple counter-factual: Suppose everyone in Jakarta had upper secondary education - instead of 29 percent of the cohort (25-34) that ended with just lower secondary - but the average learning level of those with secondary remained the same.  Then the typical adult score would increase from 201 to 211 - up by just 10 points.  That is great; but the gap between Jakarta and the median OECD is 70 points - 201 to 271 - so bringing universal completion of upper secondary would eliminate only 1/7th of the gap.

This is where it gets shocking.  Even if everyone in Jakarta had tertiary education this would only eliminate half the skills gap with the OECD. This is because the average adult with tertiary education scores only 234 and the typical (median) adult in the OECD is at 271.  Put another way, even the totally unrealistic proposal of universal tertiary schooling (even in the OECD only 41 percent of adults have tertiary) would only get Indonesia half way to the OECD at current levels of learning.

More of the same expansion of only schooling attainment cannot get countries like Indonesia to global competencies. There needs to be more learning at each level of schooling.

The pace of progress is frustratingly slow.  While we cannot track progress over time, a survey of adults can compare performance by age.  Not surprisingly, given the massive increases in attainment and the potential deterioration of skills with age, the youth (25-34) in the OECD score much better in literacy than do the older cohorts - a gap of 29 points.  What is striking is that the difference between older and younger cohorts is smaller in Indonesia - only 17.3 points separate the older cohort (55-65) and those 30 years younger (25-34), in spite of the massive progress in expanding schooling attainment.

Figure 2:  There is progress between the older and younger generations in Jakarta—but this progress is slow--slower than in the OECD (the gap is bigger for the young). 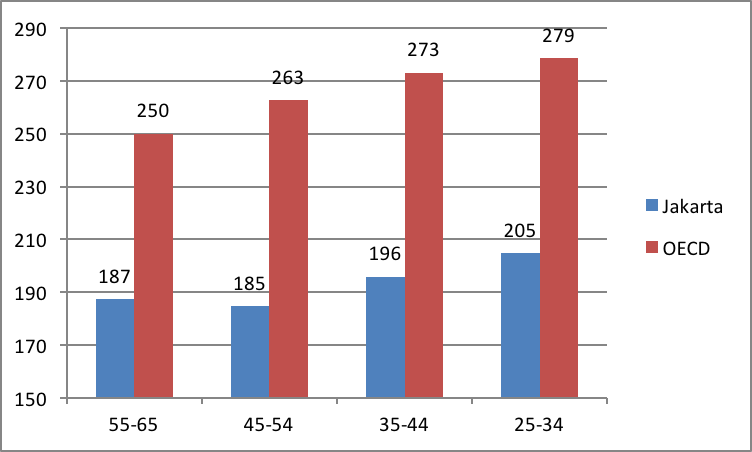 This post is not critical of Indonesia, in fact, Indonesia is to be applauded for its participation in PIAAC (and other international assessments like PISA) whereas many other countries shy away from creating the data that allows these comparisons.  Indonesia’s scores on learning assessments of students are actually pretty typical of developing countries, if anything, actually slightly above average.  If other countries around Indonesia’s (Jakarta’s) student performance level on international assessments (like PISA or TIMSS) were to participate in this adult survey, one suspects the results would be similar to those of Jakarta.  For instance, Chile, an OECD country with five times Indonesia’s per capita income in PPP averaged only 220.1.  This new data from Jakarta, while strictly only about Jakarta, is almost certainly illustrating a widespread problem.

The new PIAAC results about adult literacy and numeracy skills are another strong piece of evidence revealing the need for developing country education systems to pivot to learning.  Indonesia cannot wait 128 years to close the skill gap. It needs to accelerate learning progress now.