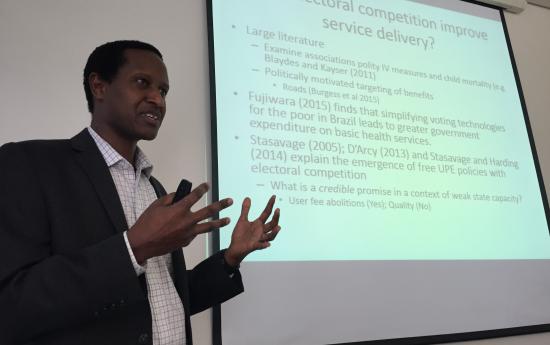 The aim of the conference was to bring together researchers working on quantitative research on education in Africa, a field which to date has been undersubscribed. Members from the RISE Ethiopia and Tanzania Country Research Teams (CRT) joined researchers from ReSEP, as well as other key researchers, for the two-day conference. The event was organised to gain a better understanding of research issues, to explore new possibilities, and perhaps most importantly, to provide an opportunity for mutual learning.

Event organiser Servaas van der Berg (ReSEP) noted, “The event gave us a great opportunity to share ideas and gain feedback from colleagues, as well as the opportunity to build a network of economists and other researchers working on African education. The participants were able to gain insight into the work carried out by RISE in Ethiopia and Tanzania, as well as ReSEP’s research in South Africa. The general feeling amongst participants was this was a very worthwhile exercise and worth repeating in the future.”

This feeling was echoed by RISE team members including Belay Hagos Hailu, from the RISE Ethiopia team and Addis Ababa University, who highlighted the benefits of such a gathering: “The event gave us all a chance to discuss our research in more detail and have insightful conversations about education in Africa. We’re looking forward to seeing further research from both RISE and ReSEP in the coming year and hope the network we have created will be beneficial to all those involved.”

James Habyarimana (Principal Investigator for the RISE Tanzania CRT and Associate Professor at Georgetown University) added, “The conference was a wonderful opportunity to connect with researchers in South Africa and Ethiopia working in distinct and also familiar education contexts. The two days provided an opportunity for each team to discuss their research agenda in both broad ways, to introduce other researchers to their unique contexts (how does the system work in each country), and also deep ways (what are the specific research questions that emerge in those contexts).

"Despite an even mix of two major academic disciplines represented at the conference (education psychologists/economists) and the necessary context descriptions, there was a very rich and probing discussion of research across disciplinary lines. I think I speak for all of the Tanzanian CRT participants, when I say that it was a very worthwhile undertaking — both as a platform to share ongoing work, but especially as an opportunity to learn about similar systems level work being undertaken in South Africa (and Ethiopia).”