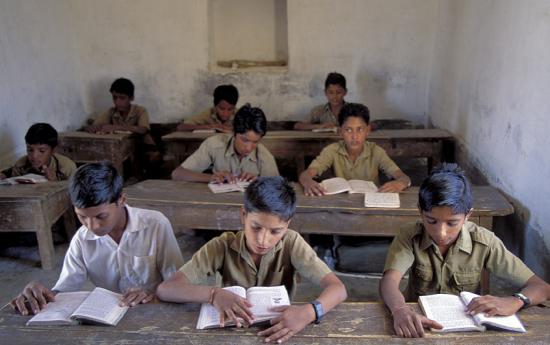 Research on Improving Systems of Education (RISE) - a new initiative aimed at conducting high-quality research to build evidence to enhance children’s learning levels throughout the world - announced today that it will begin work in India.

The £4.2 million, six-year undertaking in India is one of four research projects currently being launched in countries throughout the world in order to shed light on ways to address a global learning crisis.

Nations around the globe have been remarkably successful in making progress toward universal primary schooling, but in many places, learning levels are poor, or have declined. As a result, even when children finish many years of schooling, they still lack basic maths and literacy skills. The RISE agenda emphasises the need to make changes that can provide children with the education they need to be successful adults in their local, national, and global communities.

“The fact that nearly every child is in school represents an enormous victory for humankind,” said Lant Pritchett, RISE Research Director, senior fellow at the Center for Global Development, and a professor of the practice of international development at Harvard’s Kennedy School of Government. “Now that they are there, let’s continue that momentum to make sure that every child in school is learning.”

A RISE Country Research Team will conduct rigorous tests of large, ambitious reforms intended to improve student achievement in India, where low and unequal learning outcomes have persisted for the past decade despite a near tripling in public expenditures on education.

The work aims to lead to insights about the underlying reasons why reforms intended to enhance student achievement work or fail, and to use these insights to inform policy globally. The research is intended to enhance understanding of effective levers for change within large and complex education systems by virtue of the sheer scale of the reforms, which are being launched in locations that in terms of population and geography are as large as entire countries. The size issue is of particular concern because many small-scale reforms find that replicating successful results can prove elusive on a larger scale, even when such reforms are replicated with great fidelity.

“Our research aims to provide scientifically rigorous evaluations of reforms at a scale relevant for policymakers,” said Karthik Muralidharan, a principal investigator of the project, associate professor of economics at the University of California San Diego, and the co-chair of the education program for the Abdul Latif Jameel Poverty Action Lab at the Massachusetts Institute of Technology. “This research should give us a granular understanding of day-to-day political and institutional constraints. It should give us knowledge about what feasible levers may be used to devise an education system that can deliver better learning.”

A team of international experts are led by researchers at the University of California San Diego, the Abdul Latif Jameel Poverty Action Lab (J-PAL) South Asia in India, and University College London.  The multidisciplinary team will employ experimental methods that are widely viewed as the most rigorous ways of evaluating policy effects. The research will evaluate reforms in Madhya Pradesh and Delhi, where governments have made significant policy commitments to improve their education systems. The reforms are:

India is one of many nations facing a learning crisis. Enrolment in primary school is almost universal, but learning outcomes are low. For example, in 2014, 48 percent of fifth graders could read a Grade 2 text, and only 26 percent could do simple division.

“We hope our work will shed light on why the default approach to improving education quality by providing more inputs and improving teacher credentials and training has not been successful in improving learning outcomes,” said Abhijeet Singh, a principal investigator and a Post-Doctoral Research Associate at the Department of Economics at University College London, and a former Quantitative Research Officer with the Young Lives study based at the University of Oxford.

The projects emphasise educational “ecosystems,” with an eye toward finding the political, institutional and economic constraints that must be addressed to make change.

“The promise of our research agenda is to provide evidence only on whether a reform works but how it works or is impeded by the institutional context,” said Alejandro J. Ganimian, a principal investigator and an Education Post-Doctoral Fellow at J-PAL South Asia in India.

Launched in 2015, RISE is supported by £27.6 million in funding from the United Kingdom’s Department for International Development (DFID), which has dedicated £21 million to high-quality research in up to five countries, and £6.6 million to support expert advice and management; and the Australian Government’s Department of Foreign Affairs and Trade (DFAT), whose commitment of A$9.85 million has allowed RISE to incorporate a sixth country.

RISE is managed and implemented through a partnership based in Oxford, UK, between leading international development consultancy Oxford Policy Management and the Blavatnik School of Government at the University of Oxford. Research is led by Professor Pritchett and a team at the Center for Global Development, a non-profit think tank based in Washington, DC.